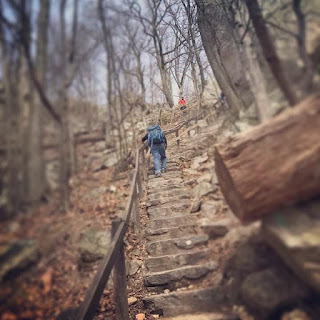 For something different, we headed out to Frederick, MD
to Sugarloaf Mountain to try out one of their trails.  It's quite the popular place.
People were hiking, rock climbing and picnicking.
We headed off on the trail and encountered the steps from hell.  Steps are far worse than hiking up an incline- and that's saying a lot for me because I really struggle on inclines. 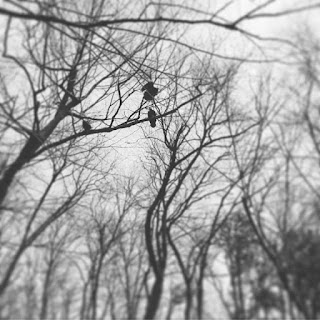 The friendly neighborhood vultures were in the trees above me.
Pretty sure they smelled death. 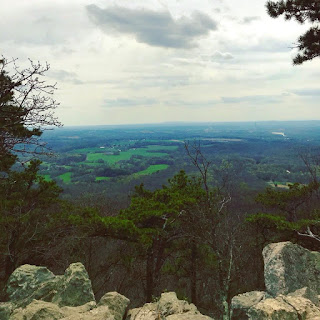 The view was definitely worth the climb though.
It was a shame it wasn't a sunnier day out,
but it was still gorgeous.
Of course, when we reached the summit
we realized we weren't on the trail we had planned to be on.
We ended up needing to take another trail to get to where we planned to go. 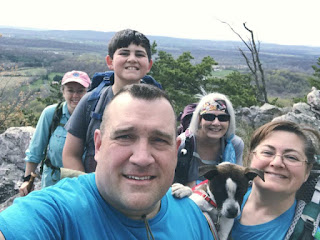 There was another vista called White Rocks that was also gorgeous. 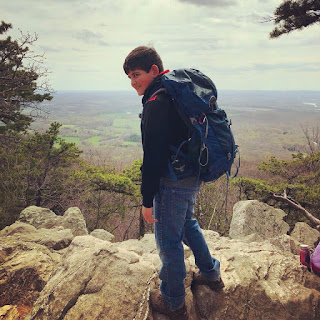 Even my normally afraid of heights son was impressed with the view-
so much so he ventured out on the rocks.
We were finally headed back towards the car,
though it felt like the never ending trail.
It was supposed to be a 5 mile loop,
but we weren't sure how much extra mileage we picked up
when we went the wrong way. 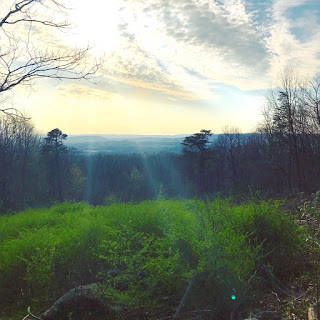 We eventually made it back to the car.
I pointed out we could have seen gorgeous views
staying in the parking lot.
In the end we hiked 7.4 miles
which is the longest hike since last October.
I didn't have much weight in my pack,
but all in all I did pretty good.
Lucy did good too
though I did have to carry her for a short while
as she was getting tired.
Definitely want to go back to this spot and try some other trails.
Posted by Jamie at 5:51 AM No comments:

Back to Catoctin: Hike 11 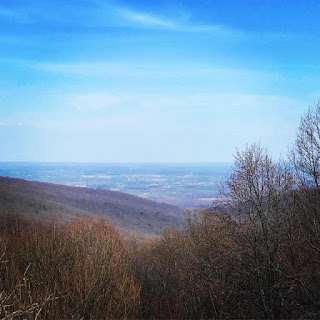 So, I'm pretty far behind in my posts.
If only I could stay home and write blogs all day and eat ice cream.
Anyway...
Hike 11 was at Catoctin Mountain Park in Maryland.
We did the loop that took us past Cunningham Falls,
past the view at Hog Rock (above)
and back to the Visitor's Center. 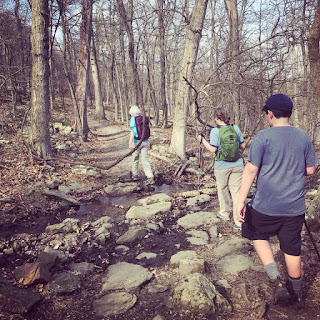 Our spring has been nuts this year, and we went from 40* weather to 80* weather overnight.
The heat kicked my butt.
We ended up walking along the road for a bit to shorten the hike
but still managed to do over 6 miles. 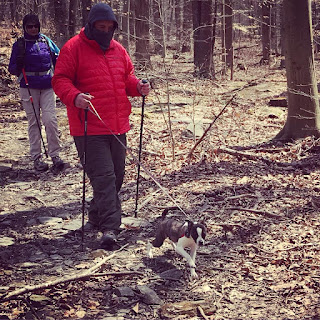 I am finally caught up with blogging our hikes.  This Sunday marked our 10th hike of the 52 hike challenge.  We chose to head out to the Strawberry Hill Nature Preserve to do one of their trails.  We have gone to this place a couple of times.  It has several trails to choose from that allows you to tailor your hike to your preferred length and difficulty.  I was happy taking our usual trip around the Swamp Trail that follows Swamp Creek, but my mom and husband wanted a longer hike (I'm still worried about the shape I'm in which is mostly roundish), so we ended up deciding to take the Green Trail which is longer and a little more difficult.  It branches off of the Swamp Trail and heads up on the ridge. 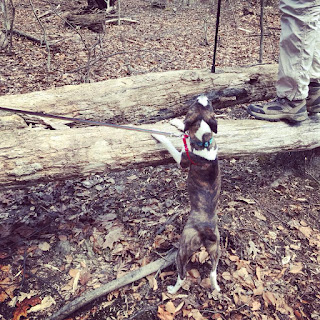 The weather was sunny but a little brisk at 40ish degrees with a steady wind.  I brought Lucy along on this hike to keep working on her hiking skills.  There were a lot of blow downs in the area, including one that was nearly impassible.  Luckily (I guess), there was another hiker coming up behind us who had been through the trail before and knew how to get around the tree.  Lucy learned quickly how to jump over the fallen logs.  It got to the point that she was trying to go off trail to jump random logs.  There was one blown down that was pretty high off the ground and was two separate trunks that she nearly flew over using one trunk to springboard over the other. 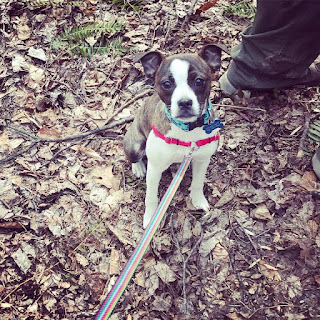 Though she learned to enjoy log jumping, Lucy seemed to be quite skittish on this hike.  Tree branches moving or snapping freaked her out.  It was like she was waiting for them to grow teeth and attack her.  Walking in deep leaves freaked her out too, though later she was chasing leaves that blew across our path.  She also doesn't like mud, so she cleared mud puddles with huge leaps.
Oh, and she doesn't really like stream crossings.  She dislikes them so much, she willingly used a fallen tree to cross the water.  Hopefully she gets over that, or trips to the beach and kayak rides are going to be really interesting. 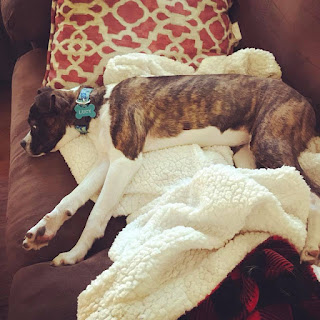 Despite not really wanting to take the longer hike, I was glad that I did.  I've managed to lose a little over 13 pounds, and it's made quite the difference in my hiking.  I'm able to do hills without stopping every few steps.  I'm still fighting through aches and pains from my hip, knees and foot, but it's manageable.  Hoping to plan some backpacking trips once the weather gets a little warmer.  In the meantime, I'll keep building up my endurance, and then come home and crash- much like Lucy. 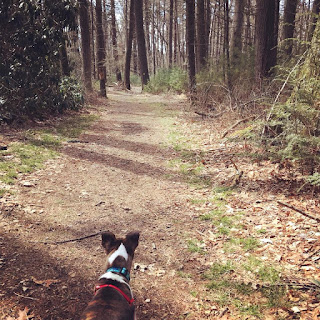 March 31st brought a gorgeous day for hiking.  It was great to be able to get outside in some decent weather.  Because it was so nice, I decided to take Lucy along to see how she would do on a longer trail.  Plus, she has a new training halter that's supposed to help with pulling.
Because we needed to stop at the Michaux State Forest Office, we headed out that way for a hike.  Our scout troop has a backpacking hike planned for the fall, and we need to get some permits and special permissions out of the way.  Unfortunately, the office was closed so we'll need to head back there again.
Since we were right there at Caledonia, we stopped in at their office and picked up a trail map.  We opted to hike along the Ramble Trail which was listed as a 2.2 mile more difficult hike.  It travels along a small section of the Appalachian Trail near the end. 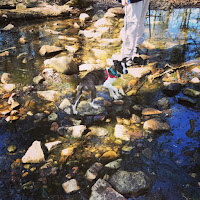 The Park was full of people because it was the first day of trout season, so there were tons of anglers along Conococheague Creek.  We only passed a few people along the trail along with some dogs.  Lucy did really well on the hike.
She tackled her first stream crossing, though she wasn't too thrilled about it.  She really wanted to stay on dry land, but she did go across though somewhat reluctantly.  She wasn't pulling as much as she typically does, but I can't say for certain if that was the new harness or that fact that she was racing around the yard earlier in the day and was already tired. Either way, it made for a nice hike.  She keeps me moving forward and gives me something to focus on other than my aches and pains.  I had her clipped to my belt with a carbiner to allow me to be hands free.  That seemed to work really well except for the couple of times she heard or smelled something in the laurel shrubs and popped open the buttons on my pants.  Needless to say, we still have some work to do.  She needs to not get so excited about seeing people, other dogs or invisible creatures in the underbrush. 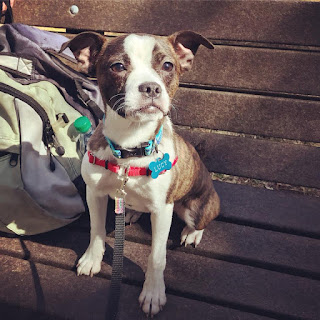 The hike overall was a pretty easy one.  We're thinking the "more difficult" designation was because of the length.  There was only one small hill, and it could barely be called a hill.  Despite not being very challenging, it was a very pretty hike on a very well maintained trail.  Total mileage was about 2.7 miles which included a short amount on the AT plus the walk back to the car.  I would definitely do this trail again despite (or because) it wasn't too hard.  There are a few other trails in Caledonia that are listed as most difficult and we're planning on going to check those out in the future.

And one of the best things about this hike was the stop at the Appalachian Brewing company on the way home.  We each got a beer and shared some spinach and artichoke dip.
We voted to hike more in areas that let us stop off and grab a beer. 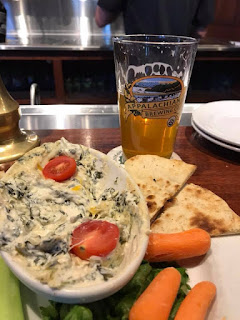 St Patrick's Day weekend brought some sunny weather and my 4 year old grandson.  It's awesome that he's as into hiking and camping as we are, because it makes it easy to find things to do.  We recently purchased a used pop up camper, so we set that up in my parents back yard (it's a 6.5 acre back yard) and camped out in the "super great tent fort" all weekend.  Temps were in the 20's at night, but the camper heater worked really well. 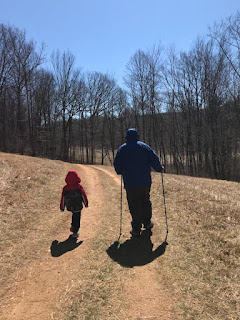 On Saturday, we went for a hike at Hashawha.  We're getting a little tired of Hashawha because that seems to be the default hiking location, but they have an aviary with various birds of prey that are unable to survive on their own in the wild.  This let's my grandson see some wildlife up close.  Plus, there's a playground and a nature center, so it's a great place to take a 4 year old with a boatload of energy to burn off.
We hiked just under 3 miles by taking our usual route on the Vista and Green trails that took us by creeks and Lake Hashawha.  All four year olds love water, and my grandson is no exception.  I'm sure it will be even more fun when the weather is warmer and he can see some turtles, fish and snakes.  Still, he was thrilled looking for different animal prints.  Large dog prints were wolf prints, and my husband's boot print was an obvious sign of Sasquatch activity (this boy is seriously awesome).
At the end of our hike, we took some time to let the boy play at the playground.  It's amazing how a playground can give a 4 year old some renewed energy!  All in all, a decent hike.  It was good we managed to get this hike in, because just a few days later we ended up with 12+" of snow on the first day of spring. 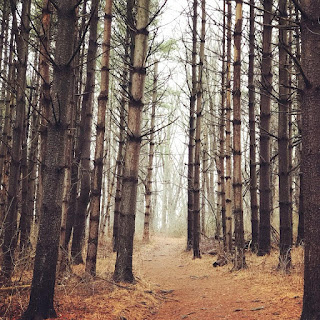 For our 7th hike, we ended up at our faithful standby hiking destination: Hashawha Environmental Center.  I don't remember the exact mileage, but I'm guessing it was somewhere around 3 miles give or take.
We took a short detour onto a longer trail, though we didn't follow it very far.  I was lucky enough to snap this photo.  Every now and then I get a lucky shot.  I think it shows just how quiet it is hiking through a grove of pine trees, which is one of my favorite things to hike through.
Here's hoping that spring will bring some nicer hiking weather (though so far that's been a bust).
Posted by Jamie at 5:45 AM No comments: 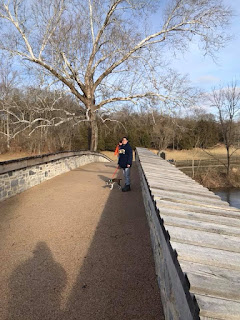 Trying to fit in a hike, we decided to detour to nearby Antietam Battlefield in Maryland to walk some of the historic area, enjoy the weather and get in a little hiking.  We also had Lucy with us, so it was going to be her first ever hike.
My favorite area of Anitetam is Burnsides Bridge.  It's a little off the beaten path, and there are several paths in that area that would allow for some mild hiking.  We opted to hike down to the bridge, across it, along Antietam Creek and up a hill to view the bridge from the ridge.  It was only a short 1-1.5 mile hike, but it was better than not hiking at all.  Lucy did pretty good, but we need to work on her leash skills.  She pulls quite a bit.  Hoping she manages to settle down and be a relaxing hiking partner. 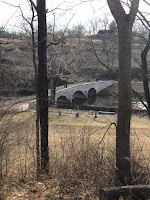